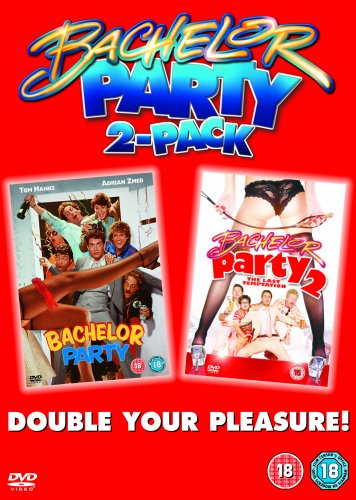 Bachelor Party is every bit as fresh now as when it first shot Tom Hanks to stardom! Hanks stars as Rick, a reluctant attendee at his own Bachelor Bash. He's a good sport, but what he doesn't know is that his fiancée (Tawny Kitaen) plans to crash the party in disguise in order to spy on him-or that her father has hired her ex-boyfriend to win back his daughter! It's an evening that no one will ever forget in this outrageously funny comedy classic.

A new generation of Bachelors turns up the heat in this laugh-out-loud follow up! Featuring hot new talents Harland Williams, Sara Foster and Greg Pitts, Bachelor Party 2: The Last Temptation is one stag party not to miss! Although ron (Josh Cooke) and Melinda (Sara Foster) are happily engaged, Melinda's scheming brother-in-law Todd (warren christie) doesn't want ron in the family business, so he sets out to incriminate Ron at the ultimate Miami Beach Bachelor Bash! Between Ron's party-hearty friends, Todd's temptations, and a nearby sex addicts convention, it's a hilariously sinful celebration you have to see to believe!