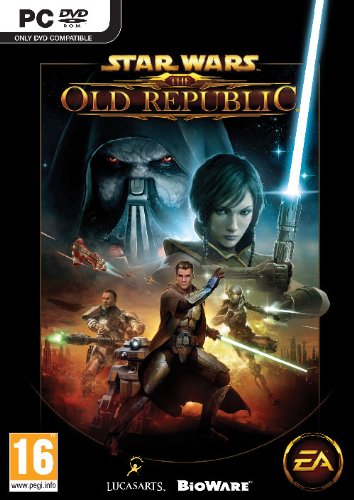 Please Note: This is the UK PAL version and you will be connected to the UK/EU Servers

Star Wars: The Old Republic is a Massively Multiplayer Online Role-playing Game (MMORPG) for the PC gaming platform, set in the Star Wars universe. The first game of its kind, in it players choose from either the Galactic Republic or Sith faction, create a character, and along with a multitude of fans playing from all over the world, explore the fictional historic period of the Old Republic, as the Jedi confront the resurgent Sith Empire. Players can assume one of many races through their character, visit multiple planets, pilot spacecraft, utilize advanced dialog options in-game, take advantage of AI companions for gathering and crafting tasks and more.

Play Star Wars: The Old Republic and be the hero of your own Star Wars saga in a story-driven massively-multiplayer online (MMO) game from BioWare and LucasArts. Explore an age thousands of years before the rise of Darth Vader when war between the Old Republic and the Sith Empire divides the galaxy.

Choose to be a Jedi, a Sith, or one of a variety of other classic Star Wars roles, and make decisions which define your personal story and determine your path down the light or dark side of the Force. Along the way you will befriend courageous companions who will fight at your side or possibly betray you based on your actions. Together you will battle enemies in dynamic Star Wars combat and team up with other players to overcome incredible challenges.